I love Japan. Love it. I love the history, the culture, the language. I tried to learn Japanese once. It kind of worked.

If Japan was up on a stage performing I would be that girl standing up front screaming her head off, crying, and fainting.

In any case, the country flat out fascinates me. I also watch anime. 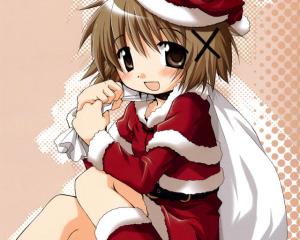 I AM NOT ASHAMED!

In many anime series, there’s the typical Christmas episode you get with so many Western TV shows. But the anime Christmas episode is a little different. It focuses less on the message of togetherness and family and more on romance. 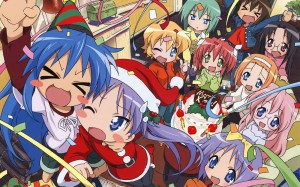 Which is weird, right? Cause, seriously, what was so romantic about Jesus being born? Not a whole lot. I mean, there was a donkey hanging out nearby. Awkwwwaaaarrrrd.

When Japan celebrates Christmas, it’s a little different. Only about .5-1% of the Japanese population is actually Christian and it’s not even a national holiday. If Christmas falls on a weekday, kids still go to school and parents still go to work. However, those marvelous Japanese have a charming way of taking foreign traditions and turning into something uniquely Japanese, and they sure as heck did that with Christmas. Whereas Western Christmas is supposed to be about religion and not gifts, Japanese Christmas is entirely commercialized. 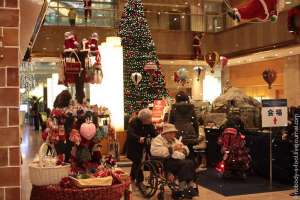 Christmas was introduced to the Japanese in the 16th century when the first European Christian missionaries arrived. However, Christianity was violently persecuted for hundreds of years (“I WILL KILL YOU” persecuted), so it had very little effect on the nation. The Japanese only became familiar with Christmas after WWII when American troops celebrated while stationed in Japan. Around that time, the country began making toys for the global Christmas market, which also brought Christmas to the attention of the Japanese.

Japanese people trained dragons and tigers to kill Christians. I totally just made that up. Tigers and dragons can't be trained.

Now, Christmas Eve, or Kurisamasu Ibu, has morphed into something like Valentine’s Day for teenagers and young adults. It’s a time to go on romantic dates and profess your feelings to someone you care for deeply. Asking a girl out for Kurisamusu Ibu dinner is an extremely romantic gesture. Every restaurant advertises “Christmas Dinner,” which isn’t a traditional Christmas dinner, but dinner on Christmas Eve. And if a couple plans on having a romantic night, they have to book tables at restaurants and rooms in hotels way in advance, because by Christmas Eve there’s no chance of finding an available seat or room anywhere.

This is a Japanese love hotel at Christmas. These are short-stay hotels that are designed to give couples privacy.

Giving gifts is customary on these romantic dates. Things such as teddy bears, flowers, scarves, rings, and jewelry. So yea, Christmas in Japan is basically Valentine’s Day in the West.

There’s another “tradition” for those not going out on romantic dates. It’s the typical Christmas Eve dinner of…

It’s not really fair to generalize and say all Japanese eat KFC on Christmas Eve, but most do eat some kind of chicken. You see, in 1971 the first KFC came to Japan. Since the fast food joint was new to the country, marketing directors were frantically trying to think of a way to sell their product. KFC headquarters in Japan got wind of a story about a Christian mission school that couldn’t get a hold of a turkey for their Christmas Eve dinner. Instead, they went to one of the only places that had something similar to what they needed – KFC. Some smart employee at HQ said “Hey, let’s make that into a marketing campaign!” and in 1974, KFC Japan came out with the ad campaign “Kurisumasu ni wa kentakkii!” That means, “Kentucky for Christmas!” This ad campaign was so effective that most Japanese people think all Westerners eat fried chicken on Christmas rather than the traditional turkey or ham.

The following four pictures are screen caps I took of the Japanese KFC website around Christmastime. I included a link above, but my guess is all this goes away after Dec 25. 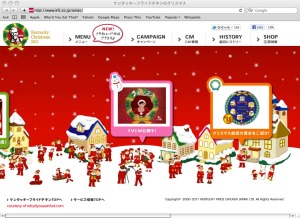 Today, many Japanese make reservations ahead of time for their Christmas chicken barrels. Yup, they get barrels. Not buckets, but barrels. KFC joints begin taking orders for chicken dinners two months in advance. In the beginning, they started with taking orders in November to avoid the ridiculously long lines on December 23, 24, and 25. But people kept calling in earlier to try and reserve their barrels so KFC moved the reservation date to the beginning of October instead. Those three days of the year make about half of a normal monthly sale. In December 2010, one KFC expected to produce around 7,000 chicken pieces on the 24th and, in all, the company sold 240,000 Christmas barrels.

This is so wonderful.

In 1974, KFC was selling meals of chicken and wine for $10, an expensive price for that time. Now, you pay $40 and get a fried chicken, salad, a special chocolate cake, and a commemorative KFC Christmas plate. The chickens are fairly meager, so the customer ends up paying much, much more than they’re worth. There’s also the option to get coleslaw, beans, cornbread, biscuits, and bouillabaisse. Bouillabaisse at a KFC. I can’t even imagine…

I would not eat bouillabaisse from KFC if you paid me. Wait, how much are you going to pay me?

However, there are no mashed potatoes. The creamy, delicious, pulverized starch is considered too difficult to make or eat, so wedge potatoes are provided instead. KFC joints also offer roast chicken, smoked chicken, and even barbeque chicken for a limited time in case they run out of fried chicken. The company is loath to make anyone celebrate their Christmas without KFC chicken.

All KFC’s, which represent respectable home-style American dining to the Japanese, get decorated for Christmas time. The statues of Colonel Sanders that grace the front of most KFCs are dressed in Santa suits, complete with Santa hats.

And another, for good measure.

Lines to pick up the pre-ordered meals can go down the block, around the corner, and out into the street, and showing up the day of to order a meal can be risky. KFC television ads aired around Christmas feature things like children wearing Santa hats and dancing around with KFC chicken barrels, while the KFC Christmas jingle (yea, they have their own Christmas jingle) plays in the background. KFC is owned by a company called Yum!, whose stock skyrockets during the Christmas season due to Japanese sales. 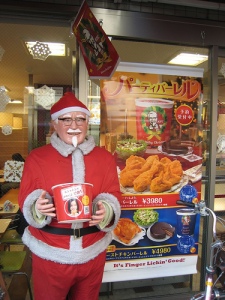 Other fast food places are trying to cash in on the fried chicken craze. Mos Burger, a Japanese hamburger chain, has begun offering fried chicken meals. McDonald’s offers a chicken meal called the “iCon Box,” which includes chicken strips, chicken nuggets, French fries, and (last year) a Christmas themed cellphone strap. Department stores, convenience stores, and supermarkets offer all kinds of chicken, from fried to baked to roasted to anything your heart desires, but people still seem to prefer KFC. My guess is KFC in Japan is significantly superior to KFC in America.

BIG UPDATE! A friend of mine, Becca, shared this post on her Facebook wall. A friend of hers said this:

“The author assumes that Japanese KFC taste better than USA KFC. Nope taste the same. I was a guest of the maint bn CSM and he treated us to a “Taste of home” It was the same but the salad had no tomato and the dressing was katsup.” -Becca’s friend Gary

So, KFC is just the same in both places. I love the internet and social networking.

Eating fried chicken meals from KFC incites a sort of nostalgia in the Japanese. It’s a tradition most adults try to pass on to their children. Here’s a quote I love:

“Yoshiaki Hirose, a Tokyo businessman, ordered his Party Barrel a couple of weeks ago. ‘It’s like a Christmas standard,’ he said. ‘KFC holds a premium position [over other fast food chains], so it’s nicer for celebrating, without being overly expensive. You want to have a party with your family, save your wife from having to cook, and you can pick it up from your local shopping street on your way home from work.’” (http://www.cnbc.com/id/40759547)

KFC isn’t the only food Japanese people use to celebrate Christmas. They also have their own version of the Christmas cake, which they call Kurisumasu Keiki. These cakes look similar to birthday cakes, and often have candles, a Santa figurine, and a Christmas greeting (“Merry Christmas!” in English) in red and green on them. Occasionally chocolates are placed on top for effect. The cake is two layers of sponge cake, filled with whipped cream icing and strawberries. The outside is covered with more whipped cream icing and garnished with more strawberries. So basically, it’s strawberry shortcake, minus the shortcake.

This particular type of cake was sold for the first time as a Christmas cake in Ginza at the Fujiya stores (a nationwide chain of confectionary stores and restaurants) in 1910. Prior to that, they were sold only as birthday cakes. Their popularity rose in the 1950’s when refrigerators were more widely available. It is possible to find Twelfth Night style cakes, Bûche de Noël, and fruitcakes, but most local bakeries don’t make them. The Japanese want their traditional Kirisumasu Keiki.

I would marry Japan if I could.

Bakeries and convenience stores (I was informed by Becca’s sister, Stefanie, that 7/11 is a popular Kirisumasu Keiki pick up joint) sell the cakes in ready-to-go boxes up until December 25th when the prices drop dramatically. December 25th is generally considered the time when Christmas cakes expire and stores want to be rid of them. This dramatic price drop actually spawned a nickname for unmarried women. A woman is marriageable until her 25th birthday but, no matter how attractive she is, once she turns 26th she’s hit her expiration date. She has to be “sold” with a great discount and is called a “Christmas cake.” It’s pretty offensive. However, this notion is becoming more and more outdated. The Japanese census shows people are marrying at older ages and many teens and young adults have never even heard of the saying. The ones that have think it’s old fashioned.

I googled "anime christmas cake woman" and got this. So I can only assume she is a "Christmas cake."

New Year’s Day for the Japanese is more like Christmas for Westerners. Families gather together to pray, send greeting cards, and have a special meal with special food. Westerners, on the other hand, like to get really drunk and party and make out with a stranger at midnight.

And that’s why I love Japan.

Photos, in order of appearance: