Christmas is the most important day of the year in China. 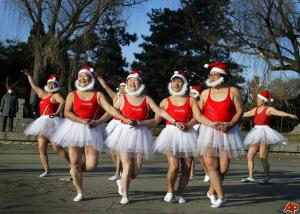 What is this magic?

No it’s not, I’m totally lying.

The most important day/festival of the year is the New Year, also known as the Spring Festival. Children are given new clothes, delicious meals, small toys, and firecrackers (always a good idea to give a child a firecracker). They pay respects to their elders and spend time with family.

How stupid adorable is this?

Christmas is celebrated in China, as well. Sort of.

Christmas in China is new. It didn’t make its way into mainstream Chinese society until later in the 1990s and, now that it has, the celebration is definitely not religious. It’s not even about spending time with cherished family and friends.

There are several million Christians in China, but when you take into account that the country contains 20% the world’s population (about 1.3 billion people), that’s not a lot. The religious holiday was introduced by missionaries in the 16th century but didn’t get popular until the 1920s and 30s. When the Communist Party took over in 1949, it once again fell by the wayside. Western “things” were a big no-no. 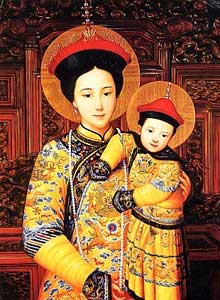 So back to mainstream Christmas. Once the Communist government became a little more tolerant in the 1980s, Christmas started to make a comeback. The assumption is the government relented (a little bit) because it was an excellent way to pull in some profit. Stores began a-selling, people began a-decorating, and food got a-eaten and by the mid 1990s it had morphed into a commercial success. There was too much pressure from the Communist government to keep religion out of Christmas, however and it became the commercialized version of Christmas (probably even more so) that we know in America, minus the religion.

Watch this video. The answers to “what’s the meaning of Christmas?” are charming (no sarcasm, I thought it was lovely).

“I heard that it has something to do with a person called Jesus.”

What’s so striking and wonderful about the answers to those questions is the information westerners (like myself) see as completely commonplace are not universal knowledge. There’s this ingrained idea that we know it so of course everyone knows it. In the same vein, if westerners were asked, “Do you know who Guanyin is?” we might have similar answers that would charm the pants off an East Asian Buddhist. Differences in cultures, my dears. It’s fascinating.

P.S. She’s the goddess of compassion. That’s the shortest answer I can put in a photo caption.

Anyway, what Christmas has become in China is a little bit what Christmas has become in Japan. A time to shop, eat, and give gifts to your boyfriend or girlfriend – a little bit like Valentine’s Day. There are holiday theme parks erected, huge events planned, and everyone spends a butt-ton of money. One event that took place in Hong Kong last year was called the Ngong Ping 360 Snowy Chocolate Christmas. From December 8th through January 2nd there were daily chocolate tastings (complete with chocolate fountain) and chocolate making workshops. 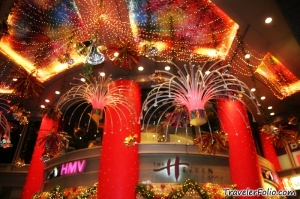 So…what about the food?

On Christmas, the Chinese eat western. 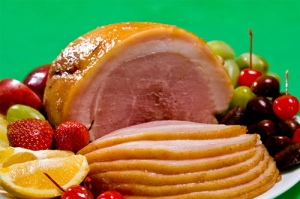 During Christmas, western restaurants and hotels prepare extravagant Christmas feasts. They serve “traditional” Christmas foods, like turkey, roast beef, cranberry sauce, and veggie sides. Large international hotel chains offer Christmas buffets to tourists visiting for their vacation, which are so popular that people have to make reservations months in advance or they can forget the turkey. Hotels, department stores, bakeries, and larger grocery stores sell lil’ yummies like Christmas cookies and peppermint drops. International chain grocery stores tend to have more of the western Christmas foods and treats than other establishments.

Image advertising the Christmas buffet at the Carlton Hotel in Singapore.

The interesting thing is, if you visit china.org.cn to read about Christmas in China, their information is more of an ad for shopping for everything ever and spending a load of money than the idea of Christmas. Quickly, from the about section of China.org.cn:

“China.org.cn offers broad access to up-to-date news about China, with searchable texts of government position papers and a wealth of basic information about Chinese history, politics, economics and culture.

The authorized government portal site to China, China.org.cn is published under the auspices of the State Council Information Office and the China International Publishing Group (CIPG)in Beijing.”

When it comes to food suggestions on the website, there’s really no rhyme or reason. There’s encouragement to stop dieting and eat everything you can. There are four images of roast turkey (one of which is a lil ridiculous – see below), and names of a few places that offer Christmas dinners or specials. But the next few articles don’t even mention the word Christmas. They advertise a café, chocolate chip cookies, molecular gastronomy, and dim sum. They’re simply encouraging people to eat out.

If you’ve ever done this, show me. Please.

While most Chinese elect to eat out on Christmas, some families have begun preparing elaborate Christmas feasts at home. If you want to go with traditional western, your best bet for ingredients are chains like Jenny Lou’s and Carrefour in china and City’Super in Hong Kong and Taiwan. They stock turkeys (not a native bird of China), cranberries, and all the necessary fixins. However, most Chinese stick with their own festival foods – dumplings and Peking duck for instance.

Eight Treasures Duck, you say? That sounds interesting! What is it?

IT’S FILLED WITH SO MANY THINGS.

Understandably, Chinese people are confused when they come to America for one reason or another and find out not all Americans celebrate Christmas. They’ve been brought up believing that Christmas is America’s national holiday. The idea that some people eat Chinese food on Christmas instead of mounds of turkey is baffling. Chinese immigrants in America usually celebrate Christmas with Chinese food as well; only they go with traditional festival foods instead of General Tso’s chicken (which, incidentally, was most likely invented in New York City).

There is one Christmas tradition that is purely Chinese: giving apples. It has become popular to give apples on Christmas Eve; so popular that stores sell apples wrapped in colorful paper. Why do they give apples? Well, Christmas Eve is called ping an ye, which means “quiet or silent night.” The word for apple is ping guo, which sounds similar.

(source)
And that’s why they give apples on Christmas Eve. 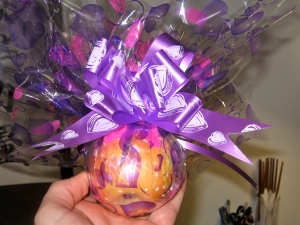 If we look at the apple in China on a slightly deeper level, there isn’t much there. Apples aren’t a native Chinese fruit so the type of ancient meaning that might be associated with, say, the peach (the fruit of life), is fairly non-existent. However, there’s indication that the apple represents peace in China, which might be part of the reason why apples are gifted. The only reason I’m suggesting this is another Chinese Christmas tradition that implicates a similar idea – oranges.

Often in the Christmas displays in shop windows, a bowl of fruit, particularly tangerines and oranges, is prominently featured. That’s because oranges are thought to bring wealth, joy, and good luck, as well as ward off evil spirits. Still, the orange holds more significance in Japanese myth and (as we know from last year) is a common gift on Christmas in Europe and America, which is the main reason why I don’t think this can be considered an exclusively Chinese tradition.

So there you have it. Christmas food in China.

3 thoughts on “Day 1: Christmas in China”

Why'd You Eat That? by Esther Martin is licensed under a Creative Commons Attribution-NoDerivs 3.0 Unported License. Please don't steal. It's not nice.
%d bloggers like this: